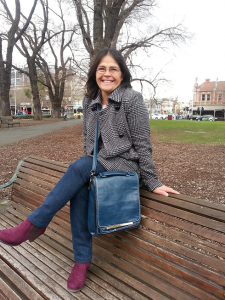 Silvia Susana Torres, was born in Buenos Aires, Argentina on January 13, 1962, she living there until 1968, when she was forced to leave her home after the separation of her parents.
She devoted a grand part of her childhood to reading, which allowed her to enter a magical world full of adventures and where the world around her Seemed to have no room. Ironically this was her source of inspiration for her books.
When she was 16 years old and because of her father’s declining health, she returned to the house where she was born, and shared his last years with him.
On September 6, 1980, her father died after a long and painful illness, plunging her into immense depression.
Before the death of her father Silvia began to write letters, these helped discharge all her grief and the letters would end up becoming a form of communication between her and her father, still to this day she continues to write these letters.
Among her favorite writers were Jorge Luis Borges, Julio Cortázar, Adolfo Bioy Casares, Gabriel Garcia Marquez, Mario Vargas Llosa, Isabel Allende, Nicholas Sparks, Danielle Steel and many others.
Endowed with an unique imagination for many years and with the encouragement of friends and her family that she decided to turn her scattered annotations into books.
Silvia has resided since 1988 in Melbourne, Australia, with her husband and her 5 sons.